In order to improve consistency, all Payment Gateways settings were moved to a Client Portal configuration.

Following settings are now available within the customer-params.json file with the following names:

Configurations for Authorize.Net related to the automatic charge of the customers were moved into Resellers configurations.

We've added an option to the system to define who pays PayPal fees for transactions. It can be set in the customer-params.default.json file:

From now on, when adding new rates, you will have the ability to stash prices for the same destinations in the future. We’ve added the new option 'Stash Future Rates' to the rates creation form, both for regular and special rates. This option allows stashing the rates for the same destinations existing in the future. The 'Stash Future Rates' option by default is set to 'preserve' for regular and additive rates, and 'stash' for special rates (see screenshots below).

Apart from that, an option for forcing notification after adding a new rate was introduced to the rates creation form. The 'Force Notification' option by default is set to 'hold' for regular and additive rates, and 'force' for special rates. 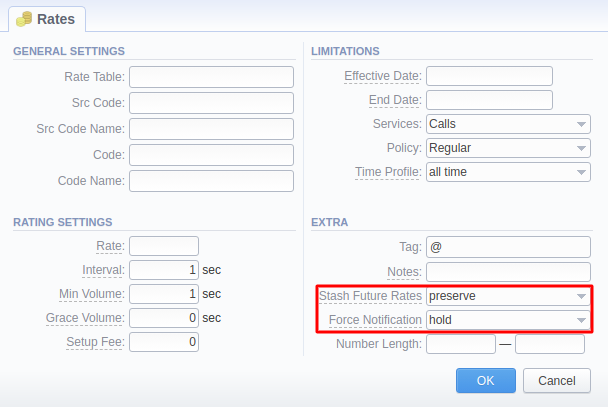 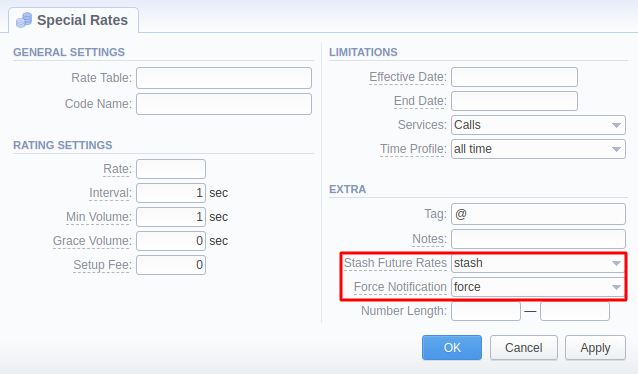 In the previous versions, forced Rate Notification was affected by the defined rate changes notification period from Configuration→Settings and the Agreement. From now on, they will be sent immediately after forcing (see screenshot).

The regular automated Rate Notification process will work as follows:

We've added an ability to set a single Tax for all rates regardless of the tag present on them. Now you can simply add a Tax Value to a Tax Profile without a tag specified (not even default '@'), and apply it for multiple rates with different tags. Additionally, these taxes can be applied when creating charges for packages and manual charges alongside the rates marked with the '@' tag.

Screenshot: Adding a Tax Value with no Tag

To prevent ambiguous situations and potential problems during upgrades and migrations, the general behavior of CoreAPI was changed. Previously, if an unknown parameter arrived at the input of the method, it was ignored. Now the system will return an error and will not execute the requested method.

In the newest version, we've implemented the restriction for Code Rules creation in the rates import form to better import management. From now on, there is an ability to create only one rule per one code (including '*' for 'all codes').

To make it more convenient to configure columns output and filtration in Detailed and Summary reports of the Client Panel, we added the ability to select various columns as in the admin panel itself. For this, two new config parameters were introduced: modules.reportXdrs.columns (to replace the previously existing modules.reportXdrs.additionalColumns parameter) and modules.reportSummary.columns.

We've added a shortcut for Special Rates to the Rate Tables section view. Now there's an ability to access special rates for the respective Rate Table with just one click.