There used to be issues with cross-cloud cluster deployments, where a node had only a Private IP address on the host and Public IP was routed externally on the firewall. With the newest version, we've implemented a special Node ID to identify nodes instead of IP addresses, which allows us to strictly identify nodes and show proper JeraSoft Cluster status.

We've introduced a Cluster Health Check service that performs monitoring of each node depending on its role. The checks include:

In case any issue is found, the system will show alerts in the Web UI.

A completely new type of Cluster Node has been introduced - Processing Node. This is a lightweight node that replicates only a part of the data required for Authentication, Authorization, and Routing. As such, it has much lower requirements on disk space and has better performance in terms of disk load. This type of Cluster Node may be particularly helpful for the customers with lots of traffic, who require more than 1 additional node for processing.

The new node does not serve as a Redundancy at the same time and can not be used to take over the Master node if the latter fails. It should be used in addition to at least one regular Redundancy Node in the Cluster.

As external tax systems use special codes to recognize the charged services, we've added support for different product tax codes. From now on, you'll be able to specify these codes for:

In addition to that, we've expanded the Exempt list functionality for SureTax. If there will be a need to exclude certain Taxes for a specific client, you will be able to do it directly while creating a Taxes Profile for them.

Also, while creating a SureTax Taxes Profile in the system, you will be able to flexibly specify Tax Situs Rules/Trans Type Codes for different types of charges:

For easier management of voided Invoices, we've added tax rollback support. It works using transaction numbers, by which SureTax identifies the results of each request. The system will store these in Invoice parameters and, in case of Invoice deletion, send a request for deletion of corresponding results on the Suretax side. If there will be a case with multiple requests per Invoice (if the amount of records is large enough), we will store multiple transaction numbers for one Invoice.

To simplify the testing process, we've added the ability to create a test SureTax profile. For this, simply check the respective checkbox in the Taxes Profile creation window:

SureTax may return error messages for individual items in the batch. We've added checks and logging for such errors, allowing for Invoice creation to abort if any error occurred. If created manually, the system will throw an error to the web interface:

Screenshot: Error while creating an Invoice 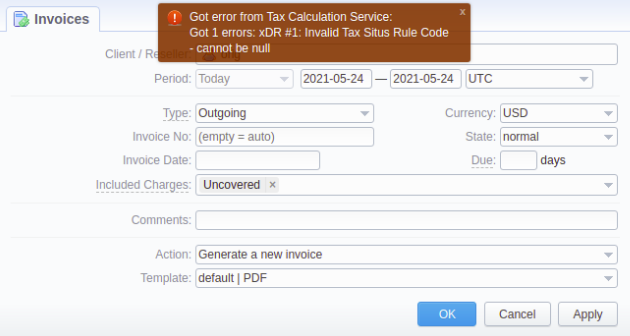 Now, the system automatically connects 'interLATA/intraLATA'-type tags to paired tags, adding 3 tags in total to every defined state or lata.

The Rule add form has been redesigned to provide for usability and a simpler look:

We've also added some of the new features:

Here we can see that we allow traffic generally for Customer A to destination 1, BUT we exclude Vendor C (term_accC, specifically) from this type of routing by adding them to the Routing Blocks section.

When updating to the newest version, please keep in mind that some of the settings changed. During migration, we WILL DELETE any Traffic Processing rules of the After Routing stage that revert original numbers in Src/Dst Replaces (in the newest version it is utilized by the Revert LNP function). And we will enable Revert LNP for the respective origination rules.

In the previous versions, we've introduced an ability to block certain vendors straight from the Routing Analysis output. Now it works a bit differently, creating a Traffic Processing rule with that vendor in the Routing Blocks block. The Filters will be filled in with the information from a respective Routing Analysis query:

Screenshot: How to block a route in Routing Analysis

We advise not to create too many rules using this approach as it will increase the processing time for routing queries. It is better to go into an existent Traffic Processing rule for such blocks and add the necessary terminator there.

We've improved the usability of stored queries for all reports.

The Report Templates section has been renamed to Report Queries, and undergone some improvements: 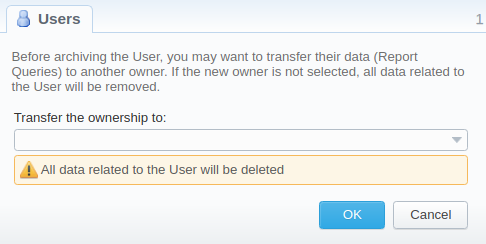 While improving the overall performance of the report, we've aligned profitability with accounting terms:

Screenshot: Expand/Collapse all button in the Summary Report output

In xDRs List report output, when you hover over the Rate, it shows some additional information (Policy, Rate, Tag), to which we've added Time Profile indication:

The following filters have been added to Summary and Orig-Term Reports for better usability:

While choosing a period for reports query, there's a new Last 15 days period.

The Files Collector service has undergone a huge performance improvement. It is now a multiprocessing tool based on the Pool approach. Previously, if there were multiple workers handling the xDR files, they would wait for when each of them will finish. Now they just take up new files for processing independently. Also, the performance speed was dramatically improved by switching from INSERT to COPY protocol (which allows for bulk inserting).

We've improved the efficiency of the Backup Manager by optimizing the backup creation process and handling faulty backups.

Whenever the system tries and fails to create a backup due to low disk space (i.e., the backup is not fully generated), the system deletes the faulty part of the backup. That is, if there were backups of the database and the files, from which the DB backup is unsuccessful, then only the backup of files is left. Therefore, we are not taking up disk space with broken data.

Apart from that, we've introduced the Disk usage threshold to the Backup Settings in the System Settings. This parameter is a threshold for backup size relative to free disk space. The default is set to 40%. If you would like to change it, please file a request to our support department at [email protected].

The Subscriptions have been visually reworked to meet the usability requirements. In the list view of the respective section, for example, the Qty of assigned Subscriptions is visible and the Limits are shown with the amount left to use by the customer:

Along with that, in the Subscriptions edit form, the visual representation of data became more structured. The enabled Billing Details and Limits usage are more visually clear and usable:

We've improved renewal charges for the Packages to suit the prepaid-postpaid logic more. First of all, the naming is more straightforward providing the Renewal Charge options as: 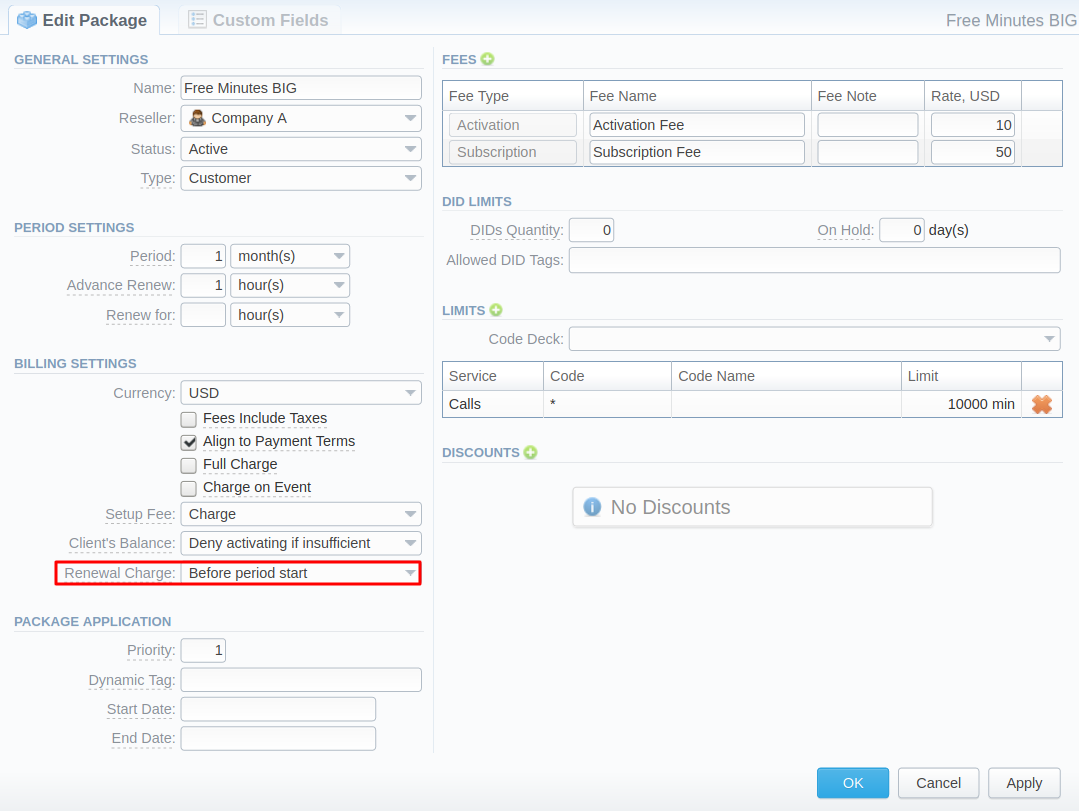 In the Invoices list, we've improved the UI for new invoice creation, as well as added more details on taxes to the interface - Net Total, Taxes, and Total columns:

If there are full xDRs attached to Invoices, they will be packed to ZIP instead of GZ.

In the Configuration→Settings section, we've added the parameters to define how many routes should be returned in the routing reply for both SIP and Radius servers. By default, they are set to 10.

For automatic alteration of routing, we've added an Expiration Date setting to the Routing Rules configuration:

If Dynamic Routing Manager will remove a certain rule due to it being expired, there will be a log message in the Events Log:

If the entered expiration date will be past, it will be displayed in red, and with the next run of Dynamic Routing Manager, will disappear from the system.

We've improved routing for A-Number billing (i.e., EU billing, US Jurisdictional). Previously, the system would look for call-specific tags in a vendor's Rate Table and reject a call finding only untagged prices. Now, if the system finds a Rate with an appropriate tag, it will still pass a call. However, failing to find such, the call will be passed if the vendor's Rate Table has a Rate for this destination, tagged '@'.

We've improved the Rate Generator's source Rates processing. Now, it will convert the source Rate Table currency to its assigned currency, if different.

In the Rates list, when the Code Name is missing for any Rate, we've introduced the ability to add the missing name to a Code Deck, assigned to the Rate Table.

While notifying a customer or during Rates Export, the system now supports Rate Tables ZIP compression for added convenience.

In the newest version, we've added another Payment Gateway integration - USAePay. Using this Payment Gateway, you are able to charge your customers automatically:

Also, your customers will be able to use this gateway in the Client Portal: 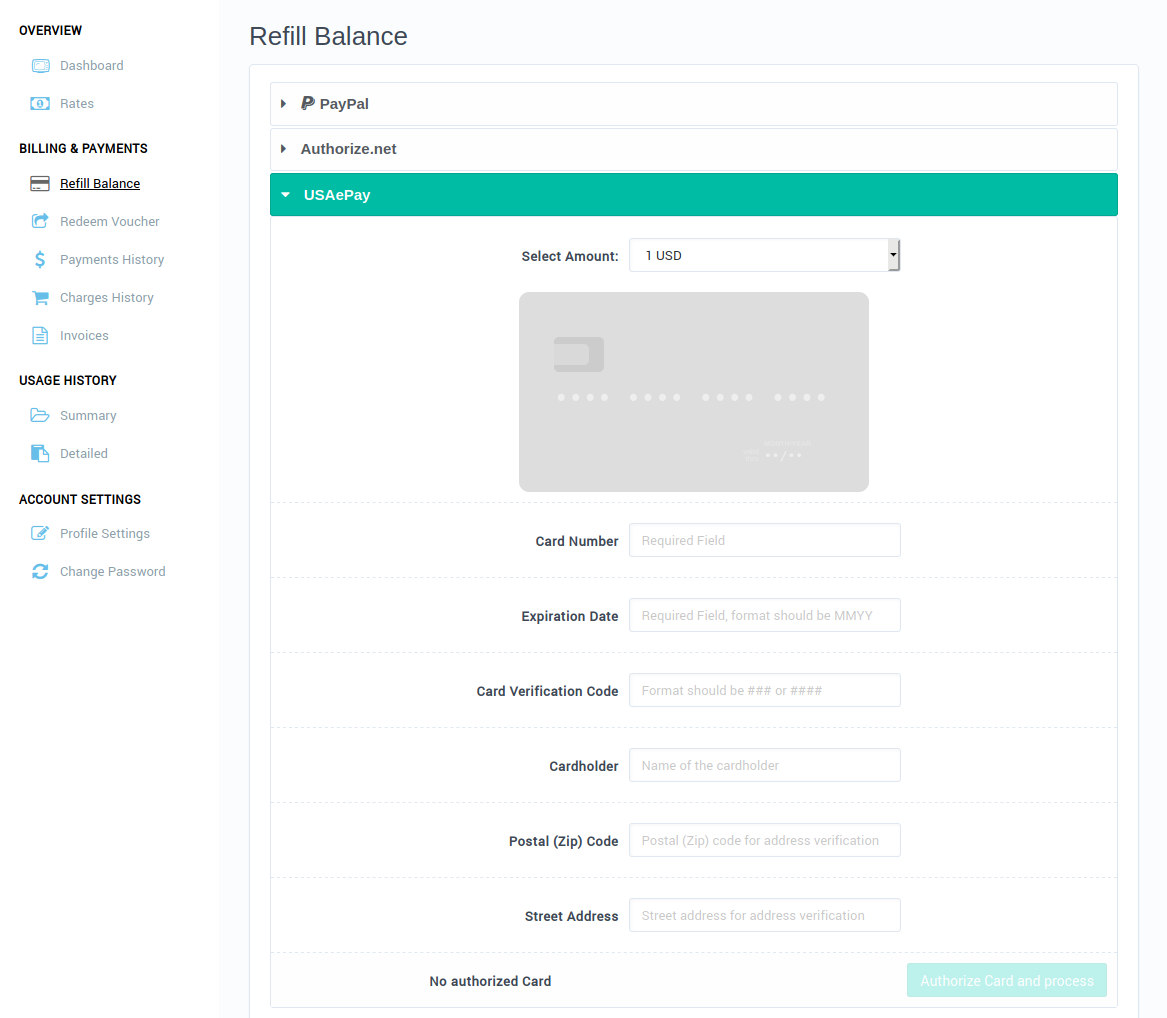 Euro has been added as available Currency for Authorize.Net Payment Gateway. Also, the CVV field for card creation in the Client Portal has become optional.

We have adjusted the Squire Anonymous SIP collector to make it compatible with multiple 'Diversion' headers.

We've added a lightweight JeraSoft LNP Collector - Tags Only to cover the case when a user needs to just add a tag while processing the LNP request.

While rethinking Subscriptions functionality, we've introduced the update method instead of close or terminate.

In the newest version, we've visually restructured the Audit Log section to achieve greater usability. The changes are grouped by date and have more usable information on display:

button, the pop-up window with additional information will open: 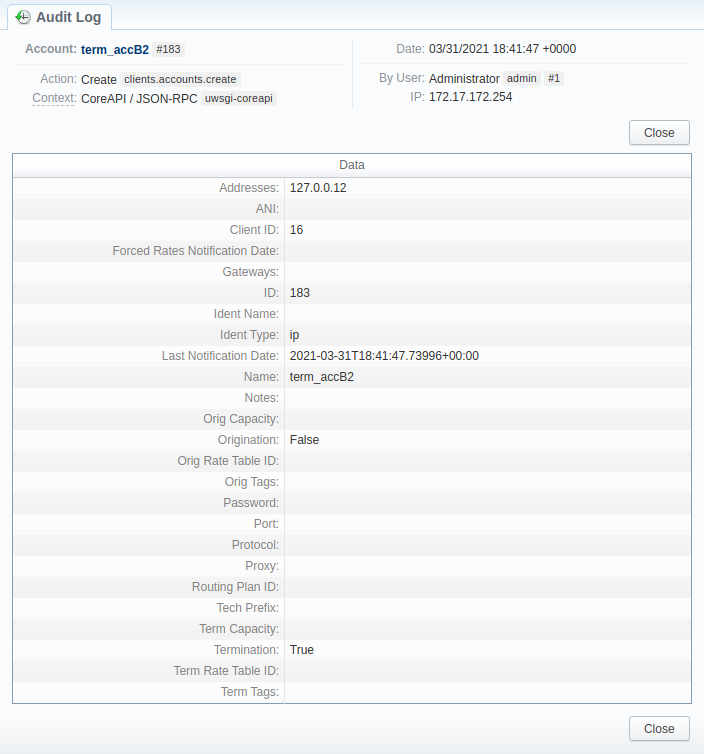 Some emails in the Mail Queue may have files attached to them that consume disk space. Thus, we've added an option to remove messages from Mail Queue after a certain number of days to section Autorotation and Cleaning in Configuration->Settings. The default is set to 365 days:

Screenshot: Delete emails from Mail Queue after in Settings

There used to be a case when you restored an old statistic day from the archive, it was immediately archived back due to the autorotation settings. We've improved this behavior by adding a respective message, alerting a user to check and change the Statistics rotate delay in Configuration → Settings before actual restoration.

We've improved the visual representation of some configurational sections of the billing system by adding custom sorting. Here is a list of these sections:

We've aligned system-wide logic in terms of wildcard usage improving the processing speed. Currently, all sections that use Quick Search add a wildcard to the end of a query only. There is no usage of a front wildcard unless a user prefers to type it in.

A user now has an opportunity to fill in a Code Deck right after its creation in the same window, which allows for a smoother experience.

We've changed the Notification Terms' naming to a more user-friendly one:

In the Transactions section, we've added an Under Owner filter with multiple input:

Screenshot: Under Reseller filter for Transactions 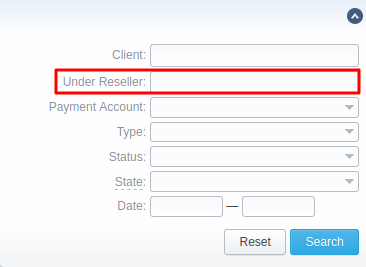 We've improved how the System Messages are displayed to introduce a more convenient way of managing them right from a control bar:

Now you can see if there are any alerts, messages, or errors from the Events Log quicker. Also, there is the ability to dismiss a message for a logged-in user:

If a user dismisses any particular message, it will disappear only from their system view. Upon any other login, the message will still be available.

We've removed the ambiguous actions while removing unnecessary charts from the Reports view. When closing the chart, a system will ask you for simple confirmation:

We've reworked the 'Disabled' flag used previously to deactivate a User in the system. The logic was aligned with general system-wide, providing the following statuses: 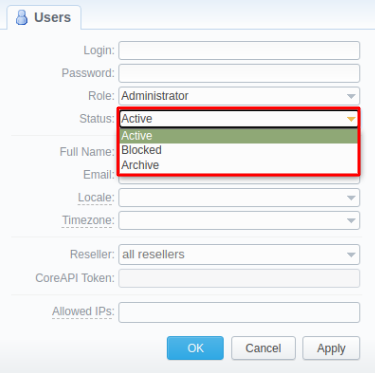 To understand, which service is normally running long and which one hung unexpectedly, we've marked daemons in the list of active System Services for clarity.

The Set Service option within Traffic Processing Rules is deprecated. Multiple Data Sources should be used instead with pre-defined Service options.

Please be noted that the API Testbed section is marked as deprecated. It will be fully removed in the next versions.