JeraSoft Billing proudly presents the new software version 3.20.0. The complete revision list can be found below.

One of the most significant developments in this current release is adding a new module for Swap Deals management. From now on, you'll save time and effort in configuring and monitoring the progress of the bilateral deals with your partners. The section is presented as a list:

As this version of the module is pilot, we are open to suggestions and comments as to how we can improve it both visually and functionally. Please send your insights to [email protected] We are always happy to hear from our clients!

The section supports Swap Deals management for multiple services and destinations. You will be able to see forecasts per deal, revenue calculations, as well as informative alerts to ensure you'll fulfill your commitments on time.

You can get to know more about the Swap Deals configuration within the system in the respective User Guide article.

In order to give more flexibility, the Routing Policies module has been completely reworked in the newest version. It is now possible not only to use predefined Routing Policies but to create your own with a set of factors that fits your business needs. Available factors are:

As you can see, newly added factors are PDD, SCD, Vendor Debt, and Payment Due. The latest two allow you to consider Cash Flow within the routing procedure. 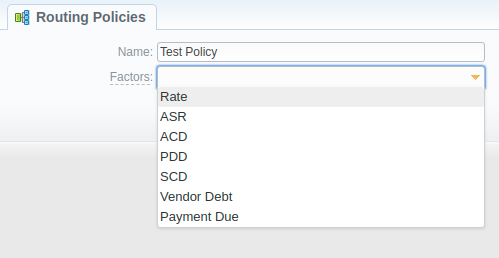 As seen from the screenshot, the "Simple Quality", "Simple LCR", and "Proportional" policies are the same as before and include the same factors. To simplify things and speed up the Routing Map generation, the "Complex Quality" and "Complex LCR" have been converted to simple ones, respectively. We have also added a "Cash Flow" policy to illustrate new factors available for routing. The overall speedup of the Routing Map generation (performed by Dynamic Routing Manager service) is 1.5-5 times depending on the specifics of your rates and settings.

The quality-based factors (ASR, ACD, PDD, and SCD) are taken as before from the Summary Report for the last X minutes, defined by "Analyze Period" in the System Settings. It is possible to set "Minimal Statistics Quantity" as a number of records to be present in the statistics to consider these factors as reliable. If the vendor didn't have enough data for the given period, default values would be taken instead.

For added convenience, you can now specify QoS filters (ASR and ACD) for each routing rule in the Routing Plan. It allows you to remove vendors with lower quality from the routing in real-time.

The filters are applied to the quality factors in the same way as it is done for Routing Map generation, including "Analyze Period", "Minimal Statistics Quantity", and defaults values given in System Settings. The filters can be applied to both Dynamic and Static rules.

If you would like to notify the administrator and/or vendor about the drop in the quality, you have to use Factors Watcher in the same way as before.

The routing to DIDs have been simplified in two ways:

Notes on DID Rates

Let's assume your customer has 2 DIDs (801001 and 801002). Now instead of adding rates for both DIDs, you can set a single rate for code 801. However, if the call will be placed for a number with an 801 prefix, that is not assigned to any customer, this specific customer will be selected as a vendor for this code not under DID rule, but regular Dynamic rules if they are present. To avoid this scenario, we suggest the following:

To improve profitability check, we've added Billing Increments matching between Customers' and Vendors' rates in the routing. To use the feature, set the Match Increments field under the Rules Processing section of the Routing Plan. If selected, it will exclude vendors with increments that do not match customers' rates from the routing list.

The field has three options:

The option "Stop Hunt" on the rules of the Routing Plans has been reworked according to the industry requirements. Before the current version, it was considered by the system only if the route under the rule was accepted. Now it will work in all cases, even if the route has been rejected due to some checks.

However, to avoid stop hunting on rules, which are filtered based on originator, not on the "quality" of the route itself, the logic is as follows. If "Stop Hunt" is enabled, but the rule was rejected due to "Orig Tags" mismatch or "Reseller Mismatch" - "Stop Hunt" will be ignored.

The new version includes improvement in the Routing Map building for the rates with defined Src Code. Previous versions considered only rates without Src Code when building Routing Map. It leads to improved Profit Margin checks. While running Routing Analysis, do not forget to set Src Party ID in the filter section for correct analysis. 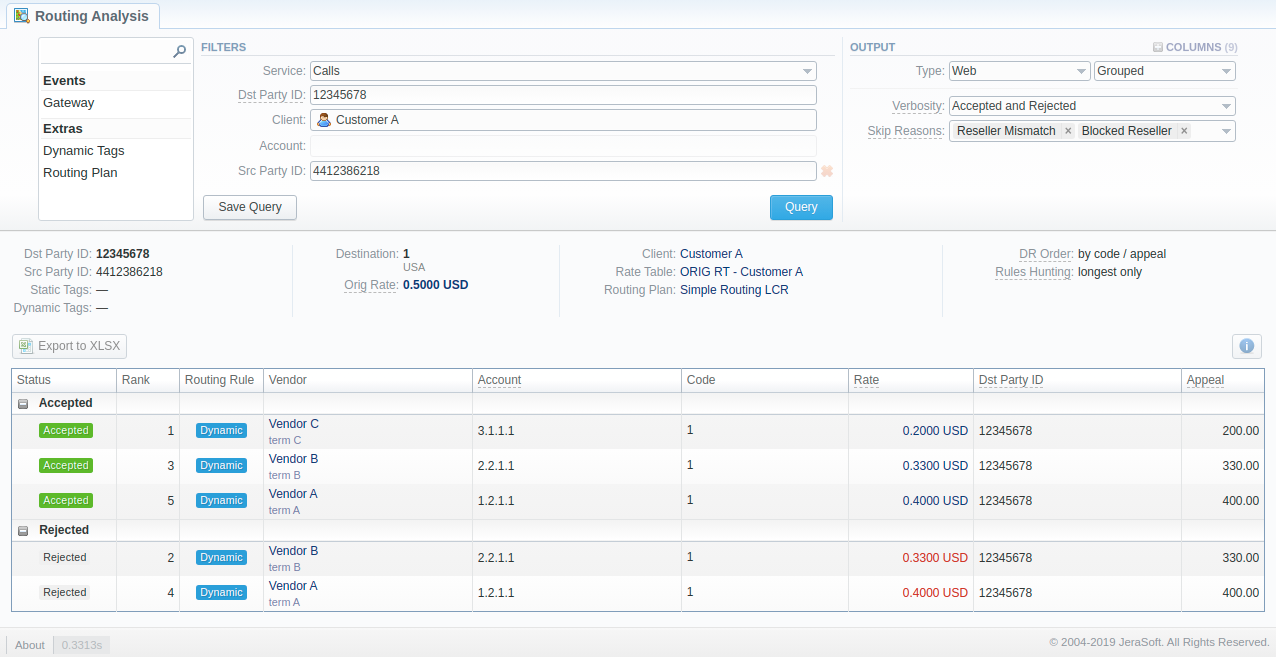 The Routing Analysis section has been visually reworked to make it more efficient for the client to analyze the query results. The new Output options include:

Other improvements are related to the columns shown in the Routing Analysis:

The last improvement is related to the grouping of the results:

To make routing management more versatile, the Client Info settings block has a new field added - Credit limit - for Terminator Settings. This setting lets you control the credit limit you have on the vendor's side.

To simplify the work logic of the Origination Limit in the Routing Plan parameters, it now functions as follows. If the mentioned limit is not set, it will work as before - allowed for the owner and all its sub-companies and/or sub-managers. If it is specified - it will include owner and selected companies and/or managers, but not their children. To actually include child companies, you'll need to select them.

To make the import process even more simple yet functional, we've added a few new options to the Step 2: Import Settings: 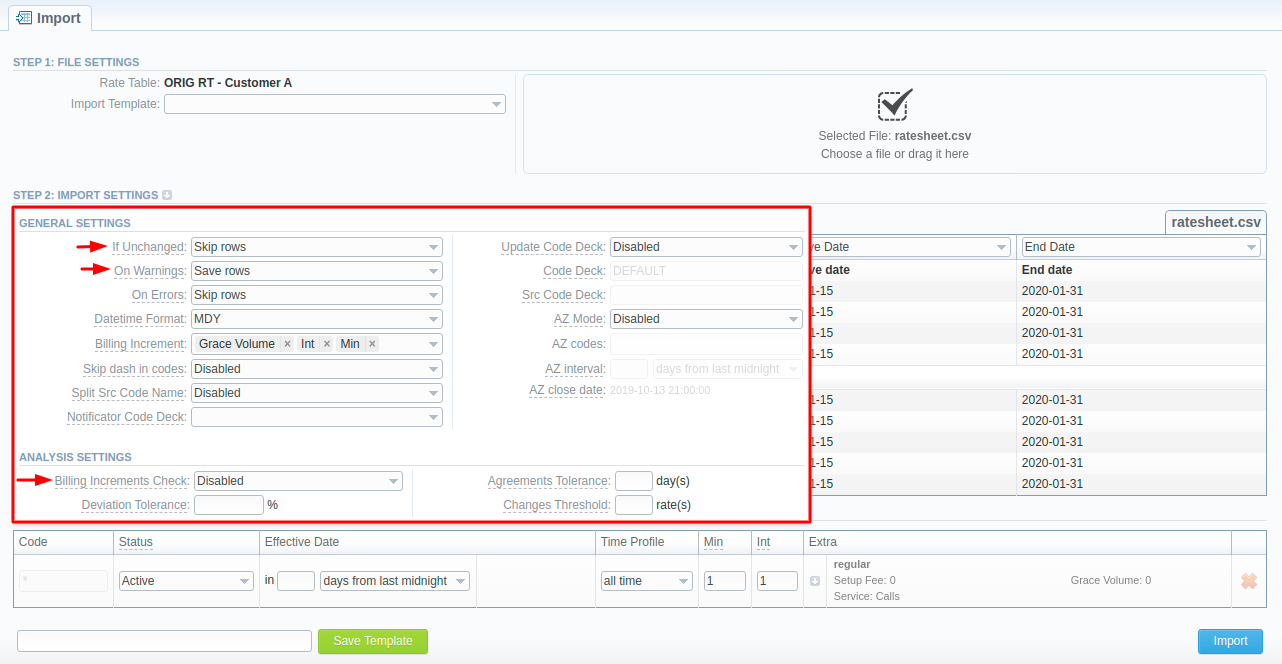 Additionally, the On Duplicates mode has been deprecated as the system can automatically detect duplicates during import. If any are found, they would be skipped.

As for the general import flow, if there is any change between the rate in the rate file and the existing rate, the system will resave the rate from the import file.

The import reverting process has been reworked for the ability to restore more accurate pre-import data. That is, if any changes were made to the Rate Table during import, by reverting a particular import, all of them would be discarded to leave the current rates as they were before import.

For instance, if you chose to stash the current rates during the import process, once you'd run the undo procedure, all of them will be again active. Also, the last modified date of the Rate Table would be restored to the one before the faulty import.

We've broadened the area detection functionality for the Jurisdictional Billing module. From now on, for those clients who have access to the LERG database, the system will be able to pull not only data on interstate/intrastate and interlata/intralata areas but also interMTA/intraMTA and local. For that, we use the LERG 6, LERG 8, and LCA databases.

This functionality is available in the Traffic Processing section of the billing system. If enabled, it will check the filtered numbers (specified in the Match section of the TP rule) through the North American Numbering Plan. You can set it up in the respective field of the rule creation form: 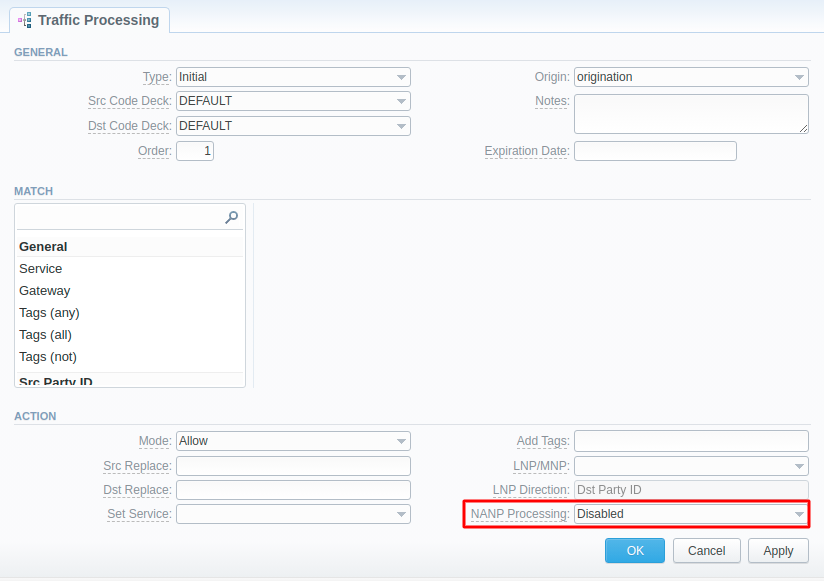 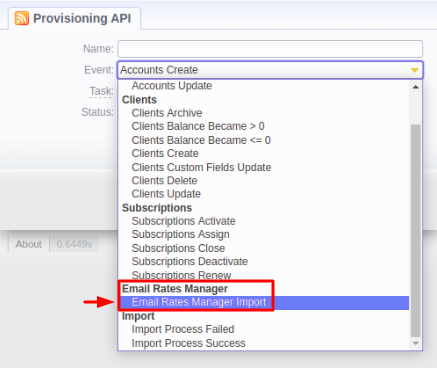 With this handler, you will be able to stop the system processes right after the prep phase to execute any other needed tasks.

To allow notifications or any other third-party events on the import process results, we've added a new handler to the Provisioning API - the Import handler: 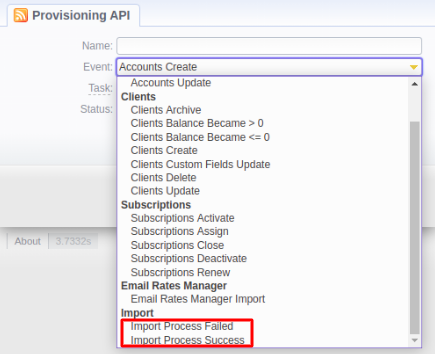 The Balance Report section faced a couple of renamings:

Direct access to Client's Customer Portal Credentials has been deprecated and a dedicated method created for this need. See the code example below:

All changes are related to UI improvements of the Traffic Rules section: 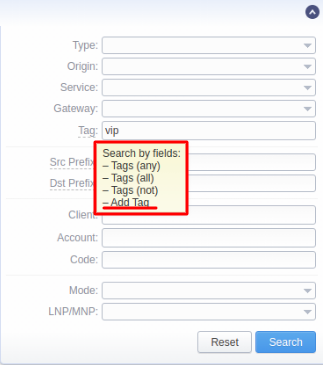 We've broadened the Authorize.Net currencies support by adding CAD as one of the available Gateway Currencies for integration. You can set this up in Reseller settings -> Autocharge Settings tab.

In sections where no exact count of rows estimated in order to improve performance, we have removed the "Last Page" button to avoid confusion.

Please be noted that the following sections are marked as deprecated:

They will be fully removed in the next versions.